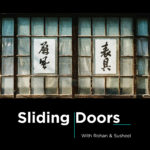 Sliding Doors Podcast
#8 Minimalism: "How Many Things Am I Allowed to Own?"

Is minimalism just about getting rid of stuff? And if you want to be a minimalist, are you allowed only 1 spoon, 1 bowl and 2 t-shirts? In this episode, we debunk some of these mainstream myths, explore what minimalism could be about instead, and offer some real-world examples of how it can change your life.

This site uses Akismet to reduce spam. Learn how your comment data is processed.